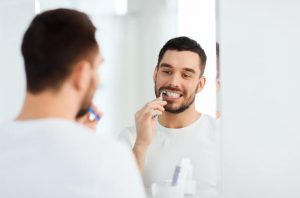 What does mouthwash do?

Mouthwash has many uses. According to the ADA, it freshens breath, helps to prevent tooth decay, reduces plaque, prevents and reduces gingivitis, and reduces the speed at which tartar forms. Consumers can find ADA accepted mouthwash without a prescription. (Some mouthwash, nowadays, can even whiten teeth, but that’s considered a cosmetic use.)

What ingredients are found in mouthwash?

The ingredients can include cleaning agents, alcohol, water, flavoring and coloring.

The active ingredients can be placed into four general categories: (to quote the ADA)

It’s easy to see why you should use mouthwash every day! Just be sure to look for the ADA label on the container.